Bakeries in Puerto Rico are more than just shops where you dash in and out. They’re where neighbors and friends gather to linger, talk, read, and eat. 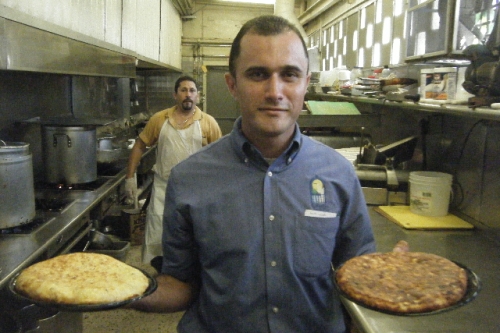 My taxi driver René Lopez, a former baker, shows off torillas (omelette pies full of eggs, onions, and potatoes) at Panaderia España, where he once worked. Photos by Bakery Boy.

I only discovered Panaderia España through coincidence and a friendly taxi driver.

This terrific bakery (panaderia) wasn’t anywhere near my beachfront hotel in San Juan, Puerto Rico, the capital of this U.S. territory in the Caribbean. I shot past it on a busy highway coming from the airport without even noticing and certainly wouldn’t have found it on my own.

By chance though, a taxi driver named René Lopez showed up at the San Juan Marriott Resort to take me across the city for a tour of the Bacardi Rum Distillery. Cabbies can be the best guides, because in their line of work they go everywhere, see everything, and get an earful of reactions from all the people they usher around town. 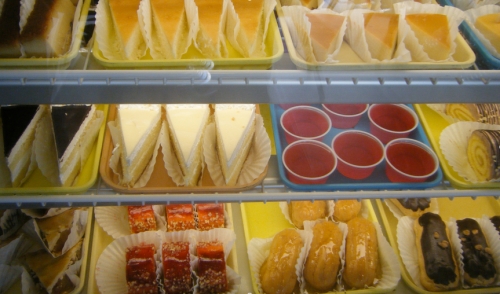 On our way to Bacardi we talked about rum, naturally. René told me what to expect at Bacardi and about two other distilleries on the island, Don Q and Ron del Barrilito. Afterwards, while heading back, I mentioned that I write about bakeries. It turns out René worked as a baker for nine years before switching to taxis. If I didn’t mind a short detour, he said, we could swing by his former workplace and he would show me around.

I rushed right past without noticing it from the highway, but found it later through luck and the right cabbie.

EUREKA! This lucky find is a bakery blogger’s version of a gold miner hitting pay dirt and shouting Eureka! An off-the-beaten-path bakeshop and an inside connection don’t come along every day. So we changed course toward the Isla Verde section of the city and soon entered the bustling Panaderia España, a neighborhood anchor since 1972.

The entire staff and many of the customers were genuinely happy to see their old friend René again. One co-owner, José Rodriguez Lopez—upon hearing that their baker-turned-cabbie had brought a journalist along who could tell more travelers about the place—seemed very happy at the prospect.

With bilingual René serving as interpreter, José wanted me to know that newly appointed U.S. Supreme Court Justice Sonia Sotomayor, who is of Puerto Rican descent, dropped in one day. Her visit involved tag-along journalists, and the positive attention it brought apparently made José glad to have me there, even though I was tailing a taxi-driving baker instead of a renowned judge.

José showed me around. Hundreds of hot Spanish-style loaves—long, thick, soft, pale bread to be loaded with garlic-butter or put to work sopping up soups and sauces at any meal—crackled as they cooled on racks. Thinner, denser baguettes destined to become Cuban sandwiches were just going into the oven.  A team of bakers filled fruit pies as well as breakfast pies (with eggs, ham, and cheese), squirted custard into éclairs, shook powered sugar or drizzled melted chocolate onto doughnuts, sliced cheesecakes into neat wedges, arranged fresh strawberries on chocolate tortes, stacked and frosted layer cakes, rolled cinnamon-sugared puff pastry into what I call elephant ears (I forgot to ask what they call them, but oregas de elefante seems unlikely), and much more.

FULL DELI René insisted we order hot-pressed Cuban sandwiches. “They’re the best in San Juan,” he assured me—dense, chewy submarine-shaped buns smeared with butter (yes, it must be butter, he said) and stacked with slices of cured ham, roast beef, and Swiss cheese. Before those were ready I was biting into a jelly roll-style guava-and-cream-cheese pastry (there’s a mango version too) and contemplating the head-still-on whole roasted pig sprawled on a bed of vegetables and rice, paella style, behind steamy showcase glass.

Whole roasted pig, seen paella style on a bed of vegetables and rice, is typical of beyond-just-bakeries Puerto Rican panaderias.

Yes, bakeries in Puerto Rico go way beyond the usual sweets we know on the mainland. They’re open from early in the morning until late and night and serve a full roster of breakfast, lunch, and dinner foods like you’d find at a great deli.

If you can make out the chalkboard menu in one of my photos, that is indeed pulpo a la gallega (octopus Galician-style, as found in northwestern Spain), lechon asado (roast pork), fabada (bean stew), and camarones enchilados (shrimp in a spicy chili sauce) in the mix. Sweets have their place, but Puerto Rican bakeries are more like full-scale restaurants known for variety.

All day long, Puerto Rican bakeries fill with patrons who linger at long communal tables to talk, eat, and watch the world go by.

LINGER Conversations are part of the true panaderia experience too. Like Panaderia España, many have dozens of long tables that are filled at all hours with people talking, eating, reading newspapers or books, and watching the world go by. They’re like community centers, neighborhood watering holes, diners, and bakeshops all rolled into one.

Thanks to a taxi driver with a baking past, Panaderia España became my first Puerto Rican bakery experience. It wasn’t my last. Others offered a similar wide variety and likewise teemed with customers any time I happened upon them. Look for more about them in future posts.

WHAT’S THAT SLOGAN? My high-school Spanish is pretty rusty. I do my best, rifling through a Spanish-English dictionary for key words and tossing proper grammar to the wind. But I was stumped by one slogan printed in red on a white box of goodies I left Panaderia España with. The large print was easy enough: Panaderia (bakery), Reposteria (pastries), Licores (spirits or liquors). The name España, scrawled across an outline of Spain, was obviously “Spain.” A subhead came to me quickly too: Especialidad en Productos Españoles (Specializing in Spanish Products).

The fine print at the bottom, however, threw me. I turned to René, my trusty taxi driver, who broke into a grin at the sight of Tu hijo cuenta con la major defensa contra las drogas… cuenta contigo ¡¡no le falles!! It’s an anti-drugs public service message, he explained, along the lines of a missing child’s face on a milk carton. Roughly, it reads, “Your son has the best defense against drugs, counting on you, don’t fail!”

Oh. Not exactly a message I expected to find on a bakery box. But okay, here’s to drug-free Puerto Rican kids who prefer to get their kicks from baked goods!

José Rodriguez Lopez and his crew make these pillow-y cloud-like loaves by the hundreds.