The Fat Elvis Biscuit, one of many versions of the tasty art form tempting visitors during the International Biscuit Festival in Knoxville. Photos courtesy of the Biscuit Festival

I’d like to say I’ve never met a biscuit I didn’t like. I’ve eaten plenty of them, making my own on many a Sunday morning and seeking them out in my travels. True, a few needed a tad more jam to make them palatable, but even the driest and toughest variations mellow over time into something at least close to fond memories. Most of them time, biscuits rank among the glories that make life worth living. Call them simple fare, the perfect food, everyone’s favorite, or just too good to pass up—just be sure to call me when they’re done.

The International Biscuit Festival celebrates all things biscuits in Knoxville, Tennessee, this weekend (May 27-28, 2011). Held downtown in the Market Square District, the event designed to “celebrate the heritage of home cooking and southern culture” spares no effort in making biscuits the topic on everyone’s mind and the taste on everyone’s tongue.

Among the activities scheduled:

Biscuit Bake Off — Biscuit bakers submit their best recipes for traditional biscuits, dessert biscuits, most creative biscuits, and kids’ biscuits to a panel of expert judges. [Note: Surely a bakery blogger with a name like Bakery Boy (hint, hint) should be invited to judge this competition one of these years!] Finalists prepare their versions fresh on location for the decisive last round of tasting. Yes, you can taste samples, for a small fee.

Biscuit Songwriting Competition — Clever lyrics (mostly about biscuits) and a good beat go a long way toward pleasing this particular audience, but you might say they’ve already been buttered up for the occasion. Categories include rock, country, gospel, folk, hip hop and others.

Miss Biscuit and Mister Biscuit Pageant — To earn these crowns contestants need: Poise, defined as the ability to walk a runway while balancing a stack of biscuits on the head. A talent of some kind, any kind really, but think singing about biscuits or perhaps juggling them. A sense of fashion if you consider apron-modeling fashionable.

Biscuit Art Competition — Artwork portraying biscuits in all their multifaceted glory dominate this show. Clear some wall space at home for your must-have choices of paintings, pen-and-ink drawings, photographs, ceramic or fiber sculpture and more.

Throughout the two-day festival, opportunities to eat biscuits abound, so come hungry. If you’re like me, after a weekend of biscuit-based inspiration you’ll be vowing to whip up batches of biscuits at home more often.

People line up at the showcases, waiting to point out which sweets they want boxed to go. They fill a couple of dozen tables steadily from breakfast time through lunch. They sometimes spot owner Jimmy Shashy darting around in back, keeping the baked goods coming at Shashy’s Bakery & Fine Foods.

A few know Jimmy pretty well from his 21 years at the same venerable location in the Mulberry Business District of Montgomery, Alabama. Many others are most likely unaware of just how diversified a character he really is.

Jimmy Shashy comes from a family of medical professionals, a clan of doctors and surgeons based in Montgomery and Birmingham, so he can talk medicine with ease. He studied English at the University of Alabama at Birmingham, so he can get the grammar right (when he wants to) in his Alabama country-boy accent.

Jimmy Shashy with a cream pie

He also holds a degree in wildlife science from Auburn University, knowledge he puts to use managing deer and turkey populations on about 1,200 rural acres his father maintains in part for hunting in nearby Lowndes County. Jimmy is a devoted vegetable farmer too, tending produce that as often as not end up on plates at his popular bakery and café.

Despite such renaissance-man leanings, Jimmy is first and foremost a baker. “When I didn’t show an interest in following most of my family into the medical field,” the Montgomery native says, “my mother suggested I go up to Birmingham and learn about baking from my cousin, Van Scott, who later bought Savage’s Bakery in Homewood and still runs it to this day.” (Click here for a separate Bakery Boy Blog post about Savage’s). “We both worked at Waite’s, a bakery that’s long gone now. I spent a few year waiting tables, cooking, and baking. Then I moved back home to run a Montgomery bakery that’s also gone, and in 1990 I opened Shashy’s Bakery & Fine Foods.”

Baked goods run a wide gamut at Shashy’s. Beautiful, rich pies fill a large section of the showcases, including cherry, pecan, chocolate cream, coconut cream, key lime and other selections ($10.95 to $18.95 whole, $3.95 by the slice). Layer cakes stacked three or four layers high—usually by Jimmy himself, since that’s one of his specialties—include red velvet, carrot, lemon-orange, chocolate (starting at $24.99) and a terrific strawberry cake made with locally grown berries ($32.99).

There are also frosting-topped thumbprint cookies on pecan shortbread (70¢), oatmeal-raisin cookies (75¢), cinnamon raisin buns (95¢), cream cheese and cherry Danish ($1.75), petit fours ($1.25), mini bonbons comprised of little chocolate cakes covered with butter cream and chocolate icing ($1.75), and a variety of thick brownies. Breads range from rectangular white, whole wheat, and rye loaves ($3.95) sliced for sandwich-making, to Parker House rolls ($6 a dozen), to awesome cheese biscuits (65¢ for a mini, $1.40 for one the size of a hamburger bun) that are earning Shashy’s a wider circle of fans.

The “fine foods” part of the name Shashy’s Bakery & Fine Foods packs quite a few surprises. None is more interesting and tasty than the locally famous Fried Green Tomatoes Eggs Benedict ($9.95) served on Saturdays. It involves slices of green tomato dipped in a tempura batter and fried, topped with sliced bacon, poached eggs, and a very lemony hollandaise sauce, and served with orange slices and a toasted English muffin. I recently paired this phenomenon with a buttery bowl of grits on the side and an endless cup of coffee for the best brunch I’ve eaten in years. Intriguing variations worth considering: Corned Beef Hash Benedict and Filet of Beef Tenderloin Benedict. 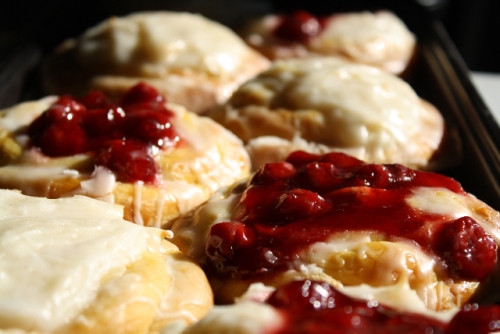 Lebanese dishes such as hummus tahini, baked kibbeh, and rolled grape leaves pop up frequently (the family name Shashy comes from his grandparents, natives of neighboring Syria). On Thursdays he makes chicken shacree, a combination of yogurt, onions, mint and braised garbanzo beans that goes well with his taboulleh and hummus. 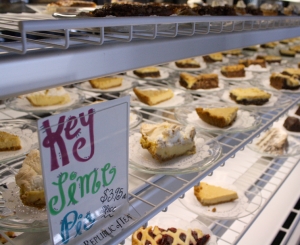 “I also make Louisiana Cajun-style gumbo, etouffee, and barbecued shrimp, Lowcountry Charleston sauté, and other dishes just because that’s what I like to eat,” Jimmy says.

He’s obsessed with freshness. “I go three times a week to the local farmers market, the Montgomery Curb Market, to pick up silver corn, onions, cantaloupe and blueberries in summer, or collards, turnip greens and rutabaga in winter—whatever looks good at the time—and work it into the menu.”

That devotion to freshness led Jimmy into vegetable farming as a sideline. “I work here at the bakery all morning, leave at about 3 in the afternoon, go down to the farm and put in another 4 or 5 hours tending my vegetables,” he says. “I’m growing the squash, okra, eggplant and a lot of the other produce we serve in the café.”

The one aspect of his story that seems most out of place is the wildlife science part, which he explains it in midlife crisis terms. “There I was, turning 40 and I’d already been in the food business for half my life,” he says. “Early on I’d thought about a career in wildlife biology or something like that, and I knew I wouldn’t be content until I got the degree I’d always wanted. So I kept running the bakery as always and took courses at Auburn whenever I could squeeze them in until I finally got it. I don’t suppose I’ll ever use that degree for anything other that managing my family’s land, but I get a great sense of satisfaction out of just having followed through.” 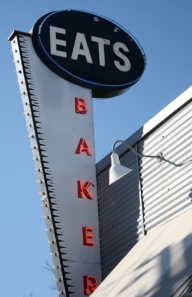 For more about visiting Montgomery: visitingmontgomery.com

For more about visiting Alabama: www.alabama.travel