Atlanta’s guru of good bread waxes eloquent about the taste and texture of truly worthy loaves. 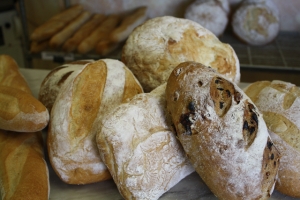 When Catherine Krasnow starts talking about her favorite subject—baking bread—listen closely because you’re in for a treat. Founder and owner of Breadgarden, an artisan bakery tucked in the Virginia Highland area of Atlanta, she’s both an excellent baker and, on this topic at least, a bit of a poet.

“A proper sourdough starter and a long rise time, that’s how you bring out the best flavor in bread,” Catherine says. “Like good wine, you get the full flavor only when you take your time and do things right, though with bread it’s a matter of hours instead of days or weeks or even years.”

With that analogy, spoken as we sat at one of just two tables in the shop’s small retail area, she’s off and running.

Perfect baguettes include a careful balance of crustiness on the outside and softness on the inside.

“So much of what makes a good loaf of bread is about texture,” Catherine says. “Take a good French baguette: The crusty outside, the soft inside. The immediate flavor of the first bite, the ‘front taste’ you get right away, then the subtle ‘back taste’ that comes later. The slight sweetness of the caramelized crust and the chewy character of the soft inside, that’s what bakers look for.”

“You get all this marvelous complexity from just four basic ingredients: flour, salt, water, and yeast,” she concludes, smiling. “Isn’t it amazing?”

Yes it is. A loyal clientele claims retail loaves before they’re sold out each day, but far more of the bread goes to wholesale accounts. Breadgarden supplies such noteworthy Atlanta-area eateries as Café Lily and Watershed Restaurant in Decatur, Wisteria Restaurant in Inman Park, The Mansion on Peachtree (a boutique hotel) in Buckhead, plus other fine bistros and coffeehouses. 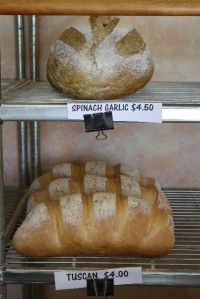 It's all about good bread.

NON-BREAD A few non-bread items inhabit a small showcase. On a good day there are croissants, fruit Danish, currant scones, butter-cream-iced cupcakes, brownies, biscotti, muffins, chocolate torte, and a ham-and-three-cheeses quiche. Around mid-day you can order an Italian sub or Mediterranean vegetables-and-goat-cheese sandwich, emphasis on the bread they’re wrapped in. Sometimes a focaccia loaded with tomato, onion, feta, and herbs will make it partway through lunch hour. But these are afterthoughts. Breadgarden is primarily about bread.

CATHERINE’S STORY She doesn’t like to be in photos but did share some background. “I moved here from the Bay Area of California in 1990 and didn’t find a lot going on in the way of good artisan-style bread,” she says. “I saw an opportunity and started Breadgarden. I’m a self-taught baker—learned by reading books, experimenting at home, and visiting bakeries. My education and my previous career were in botany and bio-chemicals, which actually helped when I was learning the science behind baking, although I soon realized it’s as much an art form. My bread-making philosophy? It’s all about flavor, texture, and freshness. I bake at night so the bread is fresh every morning when people start wanting it.”

A basket of baguettes on the door welcomes Breadgarden guests.

HIDDEN TREASURE Breadgarden isn’t exactly easy to find in the little Amsterdam Walk business district on the eastern edge of Atlanta’s sprawling Piedmont Park. Loyal customers originally find it by word of mouth. There’s no  website. It’s not a hangout kind of shop. The utilitarian retail area encourages you to get in, choose some bread, pay up (cash only!) and go on your way.

DECIDE FOR YOURSELF I was shocked and a little amused to find online reviews citing Breadgarden for rudeness and, as one critic put it, “getting a slice of crazy with your ciabatta.” Maybe it’s a matter of expectations. I visited many times anonymously before introducing myself as the guy from the Bakery Boy Blog, asking to interview the owner, and sharing an hour of interesting bakery talk with her. The place is clearly focused on making good bread, not on creating a stay-awhile coffeehouse atmosphere, and I’m okay with that. I’d return even if the service hit a Seinfeldian “Soup Nazi” level, because the bread is worth it. Perhaps the resident breadophiles are a tad eccentric about their chosen field, but go decide for yourself—and let the bread do the talking.

INFO Breadgarden has no website. It gets plenty of business through word-of-mouth and press coverage, including this Bakery Boy Blog mention, so why bother being online? Call 404-875-1166.