The Boozy Baker, A Spirited Cookbook by Lucy Baker

All 75 recipes in this tipsy cookbook include strong spirits, the results not of a barfly lifestyle but of one food writer’s devotion to never wasting a drop.

Why bake with booze? It’s a question Lucy Baker gets asked a lot now that she’s written her first cookbook, The Boozy Baker: 75 Recipes for Spirited Sweets (2010, Running Press, $18.95).

“I really like to bake,” says the Boston-area native and Brooklyn resident, who insists it’s pure coincidence that her last name matches her profession. “I often find myself with a little leftover wine or a couple shots of liquor at the bottom of a bottle, so I find ways to use it in recipes. I figure there’s no sense letting it go to waste.”

A morning person, 40-mile-a-week jogger, and marathon runner who answered my call bright and early, proving she’s no night-owl booze-hound, Lucy also points this out: “Alcohol—from spirits, such as bourbon and rum, to liqueurs like amaretto and crème de menthe, to wine and beer—imparts a subtle, sumptuous warmth that deepens the flavors of desserts and makes them taste even more decadent, luxurious, and sinful.”

“I think baking with booze if fun, plain and simple,” she adds. “Besides, people have always looked for consolation in the bottle and in the cookie jar, so why not combine the two?”

BORN TO BAKE Lucy grew up baking brownies with her mom and snacking on cookies with her dad, positive experiences she says made choosing her career path easy.

A freelance food writer and recipe tester, she contributes two columns to the online food website SeriousEats.com (Mixed Reviews, a hands-on and critical look at boxed mixes on the market, and Edible DIY, a guide to edible gifts you make yourself). For three years she helped edit cookbooks for publisher HarperCollins, and she has written articles for Edible Brooklyn, Publishers Weekly, Popular Mechanics, and Time Out New York.

The Master of Fine Arts degree in creative writing she earned at Sarah Lawrence College in Bronxville, New York, helps explain the pleasant storytelling nature of her cookbook.

FAVORITES I was drawn first to Lucy’s recipes for Molten Chocolate Orange Cake, a gooey mess in the trendy “lava” category, loaded with bittersweet chocolate and Grand Marnier, and Bottoms Up Pineapple-Tequila Cake, partly because I had just bought the perfect pan for it and partly because I had a couple of inches of tequila left in a bottle and appreciated finding a hangover-free use for it.

Later I tried the Cherry Pie with Scotch and Walnut Crumbles (I’m a scotch fan and walnut trees grow on my parents’ farm); the Red Wine Caramel Tart (my wife likes red wine and I never pass up caramel anything); and the Blueberry-Port Slump with Almond Dumplings (because I raise blueberries and always look for new ways to bake them). Everything turned out well.

Eventually I’ll make the Dirty Girl Scout Cookies, Dark and Stormy Hermits with Raisins and Rum, Boozy Baked Apples, and Pink Elephant Milkshakes, if only for their fun names.

Lucy tells me two other favorites suit the current season. “With fall’s colder weather here, give the Bourbon Apple Crisp a try. Bourbon always seems like a fall-y type of liquor to me, all toasty and warming,” she says. “And wherever you are for Thanksgiving or whoever you’re sharing the holiday with, the Coconut-Sweet Potato Pie is a good choice, with coconut rum in the crust and in the filling too.”

SAMPLE RECIPES Lucy and her publisher, Running Press, graciously agreed to share two recipes from The Boozy Baker with the Bakery Boy Blog.

DRINK WITH THAT? As a bonus suiting the theme, The Boozy Baker also includes 25 drink recipes for stirring up cocktails that pair nicely with some of the book’s baked goods. A few examples:

Sneaking a swig of vanilla extract from her mother’s pantry as a child—it didn’t taste at all the way she expected, warm and sweet like its aroma—was part of Lucy’s journey to professional foodie. Here’s her Boozy Baker recipe for concocting your own.

Rinse a clean, empty jam jar or a mason jar with boiling water to sterilize it. Set aside. Split the vanilla beans in half lengthwise with a small, sharp knife. Add them to the jar. Pour the bourbon over the vanilla beans and screw the jar’s lido tightly. Give the jar a few good shakes. Place the jar in a cool, dark cabinet or closet and let it steep for 8 weeks, shaking occasionally. The extract will darken over time. Homemade Bourbon Vanilla Extract can be used in place of store-bought vanilla extract in any recipe. There is no need to remove the vanilla beans. Makes 1 cup.

A review copy of The Boozy Baker: 75 Recipes for Spirited Sweets by Lucy Baker was provided by Running Press, a division of Perseus Books Group; (215) 567-5080.

Lucy Baker, author of The Boozy Baker: 75 Recipes for Spirited Sweets (click here to see a separate post ) shares this recipe involving the famously sweet southern elixir in its name. 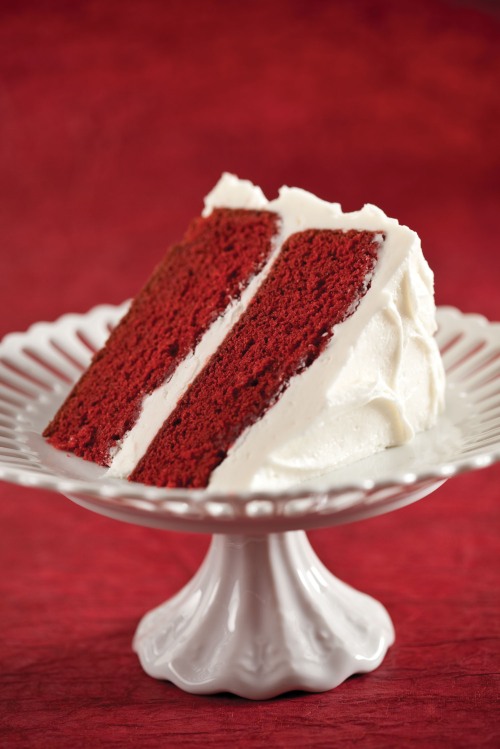 This sugary whiskey lends itself to baking, yielding a subtle hint of whiskey without overpowering the other flavors. What could be more Southern or comforting than incorporating it into red velvet cake? —Lucy Baker

To make the cake: Preheat the oven to 350°F. Grease two 9-inch round cake pans with butter, or spray them with nonstick spray. Dust them with flour and tap out the excess.

In a large bowl, beat the butter and sugar with an electric mixer until light and fluffy, 2 to 3 minutes. Add the eggs, one at a time, beating well after each addition. Add the flour mixture alternately with the milk mixture in three additions, beginning and ending with the flour.

Divide the batter between the prepared pans and bake for 30 to 40 minutes, or until a toothpick inserted in the center of the cakes comes out clean. Let the cakes cool in the pans on a wire rack, and then remove them from the pans and cool completely.

Shake It Up: For a bolder flavor, substitute Tennessee whiskey, such as Jack Daniels, for the Southern Comfort. 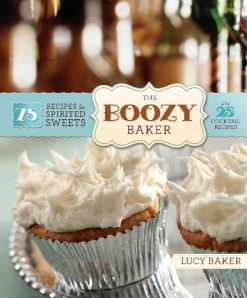 Excerpted with permission from The Boozy Baker: 75 Recipes for Spirited Sweets by Lucy Baker, published in 2010 by Running Press, a division of the Perseus Books Group; (215) 567-5080.

Lucy Baker, author of The Boozy Baker: 75 Recipes for Spirited Sweets (click here to see a separate post) shares this recipe involving that most basic of alcoholic beverages, beer.

If this recipe seems a bit intimidating, crack open a cold one before tackling the first step. The end results—scoops of beer ice cream nestled in pastry puffs and dripping with beer-infused chocolate sauce—are well worth it. If you’re short on time, substitute store-bought coffee or vanilla ice cream for homemade. Or, for a dessert Homer Simpson would love, use purchased donut holes in place of the puff pastry. The ice cream can be made up to five days ahead, and the profiteroles will keep well for a day or two stored in an airtight container. —Lucy Baker

For the beer ice cream:

For the chocolate beer sauce:

To make the beer ice cream: Combine the heavy cream and milk in a medium saucepan over medium heat. Cook, stirring constantly, until the mixture is barely simmering (you will see steam rising from the surface, and small bubbles at the edge of the pan). Remove the pan from the heat and set aside.

In a medium mixing bowl, beat the egg yolks with the sugar and salt until thick and pale yellow. Very slowly whisk 1/4 cup of the hot cream mixture into the egg mixture to temper it. Then transfer the egg mixture to the saucepan with the rest of the cream mixture and return to medium heat. Cook, stirring constantly, for 3 to 6 minutes, or until the mixture has thickened enough to coat the back of a spoon without running.

Remove the saucepan from the heat and strain the mixture through a fine-mesh sieve. Add the vanilla extract and stout. Chill for at least 4 hours or preferably overnight and freeze in an ice cream maker according to the manufacturer’s instructions.

To make the profiteroles: Preheat the oven to 425ºF and line a baking sheet with parchment paper.

Combine 1/2 cup water, milk, butter, and salt in a medium saucepan and bring to a boil. Reduce the heat to medium-low, add the flour, and cook, stirring with a wooden spoon, for 1 to 2 minutes, or until the mixture forms a ball and pulls away from the sides of the pan. Transfer the mixture to a mixing bowl and allow it to cool slightly. Using an electric mixer, beat in the eggs, one at a time.

Spoon the mixture into a large, zip-top plastic bag and snip off one of the corners. Squeeze 12 mounds of dough onto the baking sheet, spacing them an inch or two apart. Bake until puffed and golden, about 22 minutes. Turn off the oven, set the door slightly ajar, and allow the profiteroles to rest for another 5 minutes.

Remove the profiteroles from the oven and prick each one with a toothpick to allow steam to escape. Let them cool completely on a wire rack.

To make the chocolate-beer sauce: Place the chocolate in a medium bowl. Combine the cream and sugar in a small saucepan and heat over medium-low heat until just barely simmering. Pour the hot cream over the chocolate and stir until the chocolate melts. Stir in the stout.

To assemble the dessert, cut each profiterole in half crosswise. Place a scoop of ice cream on the bottom half of the profiterole and sandwich with the top. Drizzle generously with the chocolate-beer sauce and serve.

Shake It Up: Substitute another richly flavored beer, such as India Pale Ale, for the stout.

Excerpted with permission from The Boozy Baker: 75 Recipes for Spirited Sweets by Lucy Baker, published in 2010 by Running Press, a division of the Perseus Books Group; (215) 567-5080.