Duck down an alley, step through a screen door, and feast your senses on simply beautiful breads and pastries.

[UPDATE: Sadly, Simple Kneads closed on August 19, 2011, the victim of a sluggish economy. It will be missed. The Bakery Boy Blog and its readers wish owner Bill Snider and his staff the best for whatever their future holds.] 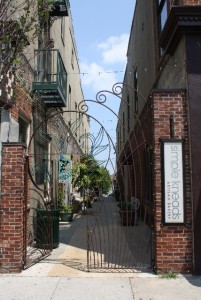 Technically it’s not an alley but a courtyard you duck down to find Simple Kneads. The narrow passage squeezes between two buildings, lending a sense of secrecy to this artisan bakery tucked just off South Elm Street in downtown Greensboro, North Carolina. Come to think of it, the artistic metal gate you pass through, a couple of small tables and chairs for lingering, some over-sized planters, and brick walls peeking from under chipped plaster create a certain “hidden European café” ambiance even before you reach the actual bakeshop. 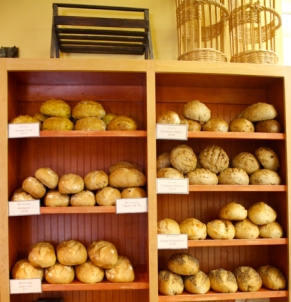 BREATH IT IN Once inside Simple Kneads the full impact hits you—the steamy atmosphere and yeasty aroma of slow-developing Old World-style breads. A tall display case of crusty brown loaves behind the counter catches your eyes. Hefty round portions of Cranberry Walnut, Harvest Curry, and Parmesan Walnut. Football-shaped Asiago Peppercorn, Five Seed, and Olive. Squared-off Ciabatta. Braided Challah. Flat Focaccia. Slender Baguettes poking vertically from wicker baskets. If your timing is right, you’ll also find Garlic Rosemary, Russian Black, Cinnamon Raisin, Jewish Rye, Rustic Farm, and even a bread called Spelt, which hardly anyone makes anymore from a somewhat rare but healthy-for-you strain of wheat. Almost all the breads are priced at or just under $5.

SWEETS TOO Pull your eyes away from that amazing collection of breads to find the sweeter side of Simple Kneads in a pair of glass showcases. Muffins, scones, almond horns, croissants, strudel, turnovers, Danish, brownies, granola bars, cookies, éclairs, lemon bars, and the day’s quiche compete for shelf space during late-morning prime time, then gradually thin out as the day wears on and the goodies disappear.

FIND YOUR NICHE Vegan desserts such as gooey raspberry brownies or chocolate chip cookies made with ground flax seeds—plus gluten-free treats for people allergic to wheat—attract devoted niche audiences. Organic ingredients and recipes declared trans-fat-free and preservative-free draw health-conscious regulars. A preference for eggs and dairy products bought directly from nearby farms satisfies backers of the buy-local school of thought. All these traits—along with the generally laid-back attitude of nearly everyone working there and much of the clientele—make Simple Kneads a to-go spot for in-the-know Greensboro residents. Lucky visitors either hear about it word-of-mouth or stumble upon it by following their noses.

MANNING THE OVEN Ohio-born owner Bill Snider—once a college classmate of Barack Obama, for years a journalist covering education issues while based in Washington, D.C., and San Francisco, and an editor for The George Lucas Education Foundation started by the creator of Star Wars—knew he was ready for a career change when, as he says, “I learned to bake partly as a way to procrastinate from writing.” With his now-former wife Ann, a fashion apparel engineer, he moved to North Carolina from California’s Bay Area. “Out there you find great bread available everywhere from bakeries like Acme Bread Company, Semifreddi’s Bakery, and Grace Baking,” he says. “Here we found nothing like that. So I bought the best bread-making book available at the time, Daniel Leader’s Bread Alone: Bold Fresh Loaves From Your Own Hands, and kept baking until I started making breads I liked.”

He sold his homemade bread at a local farmer’s market, where chefs discovered his loaves and soon served them in their restaurants. A small rented workspace, minimal equipment bought on eBay, and initial ingredients funded by a friend’s loan got Simple Kneads started. Today Bill oversees a bigger and better facility and additional staffers who produce a much-expanded menu that has grown beyond his early devotion to breads.

“Simple Kneads lets me give back to my community on a much more ‘micro’ level than journalism did,” Bill says. “We provide simple, healthy food made from scratch and using as many local and/or organic ingredients as possible. We offer a fulfilling workplace. And we make people happy. So, life is good.” 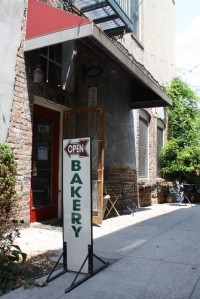 Being slightly hidden makes Simple Kneads even more of a "find" for bakery fans.

ALL AROUND TOWN Simple Kneads itself might be a little hard to find (hidden behind Mary Contrary, a home-and-garden accessories shop, three blocks south of City Center Park at the heart of downtown at 227-B South Elm Street) but its baked goods reach a variety of outlets in and around Greensboro, including: