The more I heard about Blue Dog Bakery — from a waiter, a shopkeeper, a pastry chef, a far-away friend — the more curious I became about the home of Louisville’s best breads. 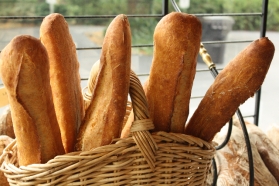 Baguettes by the basketful at Blue Dog Bakery & Café in Louisville

I’d been in Louisville for only a couple of days, and everywhere I went I heard about Blue Dog Bakery & Cafe in the Crescent Hill neighborhood.

When I ate dinner at The Blind Pig, a European-comfort-food “gastropub” in Louisville’s Butchertown neighborhood, and raved about my sandwich, the waiter said without hesitation that the crusty-outside, chewy inside roll holding together my Ivory Bacon Sandwich (boudin blanc sausage, bacon, muenster cheese, and aioli) is a “pug,” short for pugliese, a style of bread from Southern Italy.  He added,  it came from Blue Dog Bakery. 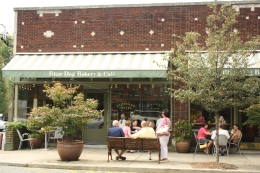 The next morning, during my second bakery visit of the day gathering material for future Bakery Boy Blog articles, the pastry chef I was interviewing said that if I’m a bread man (and I absolutely am), then I shouldn’t miss Blue Dog Bakery in Crescent Hill.

Later I was at Rainbow Blossom Natural Food Market on Bardstown Road in Louisville’s Highlands area when an employee stocking shelves saw me inspecting the bread and volunteered that it was all good and all from Blue Dog Bakery.

Then she spoke, more to herself than to me, about needing to get back there soon for some poached free-range eggs, Serrano ham, spinach, and Parmesan on French sourdough levain, a brunch special she recited so perfectly it’s clearly a memorable favorite for her.

Intrigued by three recommendations from such different sources in such short order, a called my friend Wanda two states away in Alabama.  She is, as I am, a longtime (though now former) travel writer for Southern Living.  During the 20 good years of my writing life I spent at that magazine, Kentucky was nearly always Wanda’s “beat,” and she knows Louisville well.

With nine grains kneaded in and rolled on, this bread has got to be good for you

“Oh, yes, I remember that place,” she said, glad to reminisce about a favorite city.  “That’s the bakery facing the railroad tracks in a part of town that used to be really run down but has come back nicely.  Wood-fired oven, fresh local ingredients if they can get them, no preservatives, and I think the owners even raise their own hogs for the meat they serve.  Artisanal everything, especially the breads.  If you’re still doing your Bakery Boy Blog, you’re going to love Blue Dog Bakery.”

With now four recommendations in less than a day, I knew I was on to something.  So I headed to Crescent Hill (indeed come-back-story neighborhood strung along a rail line east of downtown), found Blue Dog Bakery, and was blown away by how good it is. 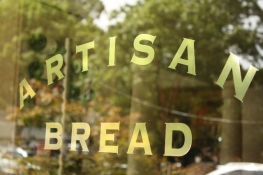 Tables outside and inside were filled with patrons visibly pleased to be there.  Everything was photogenic and, I soon learned, tasty too:  Crusty breads in wicker baskets, big cookies in neat rows, fruit tarts gleaming on chilled trays, muffins stacked on tiered platters, and on and on.

I ate an entire baguette immediately while taking it all in, then bought for later a plump round miche and a dark cranberry-walnut levain.  And a half-dozen flour-dusted white Italian “pug” rolls like the one I’d enjoyed at The Blind Pig the night before.  And a half-dozen densely multi-seeded “flute” rolls (see photo).

Even with all that, I nearly ran out before getting home the following day.  No, I didn’t eat all of it myself.  My two hungry teenagers, who were in town for concerts at the Forecastle music and art festival in Louisville’s Waterfront Park, ate their share during the drive home.  Yes, my car floor is perpetually crumb-covered!  In retrospect, I wish I’d also gotten a loaf each of Blue Dog’s pecan raisin, kalamata olive, and harvest nine-grain breads.  Printed on Blue Dog’s bread bags are handy instructions for freezing and defrosting any such oversupply. 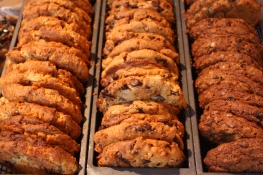 On the advice of customers who graciously let me squeeze in between them to photograph things, I ordered a chilled raspberry chocolate ganache tart and a warmed morning glory muffin for immediate consumptions, plus two each of the  peanut butter cookies, chocolate chip cookies, and oatmeal molasses cookies, also for on-the-road snacking. 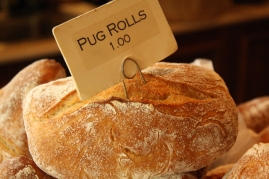 A table opened up, so I took a seat and ordered that poached free-range egg on levain item the Rainbow Blossom woman had mentioned.  It was a fine but difficult choice, considering the options included exotic sounding “octopus tartine with potato, chorizo, tapenade, and smoked paprika oil,” and “bacon, Tillamook cheddar, cheese curds, cider vinegar onions, and spicy mayo,” and “pastrami Reuben, gruyere, kraut, and thousand island,” among other temptations, each on a wide choice of breads.  Next time.

I see poppy, sesame, and fennel seeds on the “flute” rolls (there might be others too)

I am now officially a fan of Blue Dog Bakery.  My one regret is that I never met the owners, Bob Hancock (who does, indeed, pasture-raise Red Wattle hogs, hormone-free and antibiotics-free, as a sideline) and Kit Garrett.  That’s poor planning on my part for not scheduling an interview, even on short notice after hearing so much about the place.  Add in bad luck as well, for not running into either of them during three stops over the course a long weekend.  Next time.

For now, I’ll let my photos tell the rest of the story.  Enjoy the slideshow, and if you get to the Blue Dog Bakery on my recommendation, let me know what you tried.  Together, apparently with a lot of word-of-mouth help from others, we’ll spread the news. 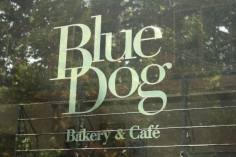 A tasty “blue” island in a leafy green neighborhood

For more about Kentucky: Kentucky Department of Travel and Tourism www.kentuckytourism.com