It’s cherry-picking time in Virginia’s Blue Ridge Mountains, a great time to drop in at Levering Orchard. The baked goods you’ll make with the cherries you don’t eat during the drive home will be fantastic.

“I love ladders,” he mused, a muddy boot perched on a low rung and a weathered hand gripping a little higher on one of the more than 150 tall wooden ladders he uses to reach fruit at his popular you-pick operation in western Virginia. “I guess any worker gets attached to the tools of his trade. I take good care of the ladders and they take good care of me. Ladders are like bridges between the ground and the sky. They’re physical links between me and the fruit.” 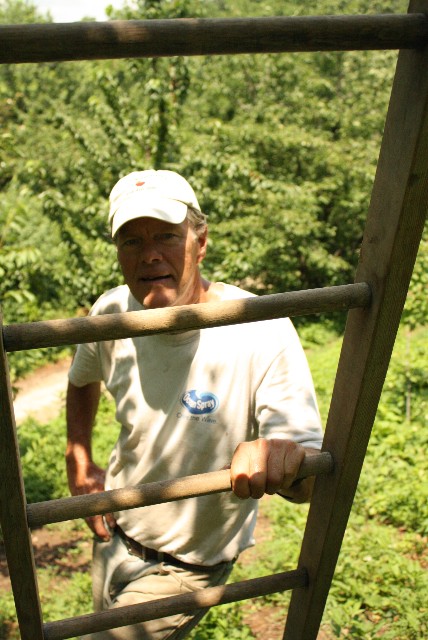 Frank has a special affinity for ladders.

It doesn’t take long to figure out that Frank, who grew up in this scenic orchard just off the Blue Ridge Parkway where his parents and grandparents before him also tended the fruit as far back as 1908, is a poet and writer as well. As a younger man he took screenplay-writing ambitions to Hollywood and met moderate success. Even now that he’s been back home for nearly three decades and is well ensconced as an orchardist, he sometimes writes plays during the winter off-season and in late summer produces shows at a little outdoor stage on the steeply sloped property. 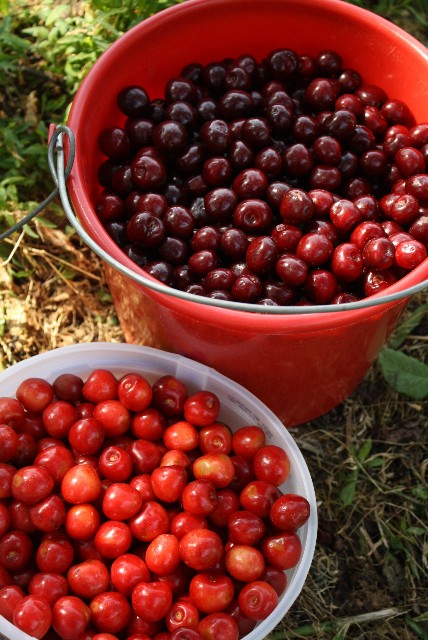 I filled these buckets in about a half hour.

I first experienced Frank’s fruitful slice of Eden 10 years ago while on assignment for a magazine article that still sits tops the media page of the orchard’s website, making me proud. Now I look forward to my return visits as much for the cherry picking, the fresh air, the scenic drive getting there, and the terrific views as I do for the chance to catch up with Frank and his family. And yes, also for the cherry-filled baked goods I’ll make in the days that follow, including a Cherry Pie recipe and a Cherry Crisp recipe (click to see them in separate posts) culled from Levering Orchard’s useful Fruit Orchard Cookbook.

Re-aimed daily toward the best spots.

Levering’s cherry season peaks in June, so that’s when I go. At the entrance an attendant offers me empty plastic buckets and points me toward that day’s best picking spots. Frank and a small crew tend to about 4,000 cherry trees in more than 40 varieties, from sour to tart to sweet and from bright red to deep purple to waxy shades of yellow. Every morning they maneuver scores of ladders, many reaching 26 feet tall, into position to give pickers easy access to the harvest.

A father and daughter team up.

Some people hurry to get their fill during the cool morning before summer’s heat and humidity kick in. Others take their time, enjoying a leisurely walk through the orchard or spreading a picnic blanket in the shade. Some go for volume, intent on baking like crazy with fresh fruit, giving part of their harvest to friends, and putting up preserves for later. Others take a more recreational approach, seeing the outing itself the main attraction and a sack of cherries as a pleasant side effect. Some revel in scurrying up ladders, no matter how shaky, into the cherry-laden branches. Others are content to take low-hanging fruit they can reach from terra firma. Most nibble a few “free samples” as they go, a practice that is encouraged within reason.

Fresh picked and ready to travel.

By the time folks check out at the cavernous, tin-roofed pack house, where their harvest is weighed and they pay $2.49 per pound for their take, they often have purple-stained fingers, lips, and tongues as a result of the endeavor.

THAT’S FRANK IN THE CHERRY-RED PICKUP 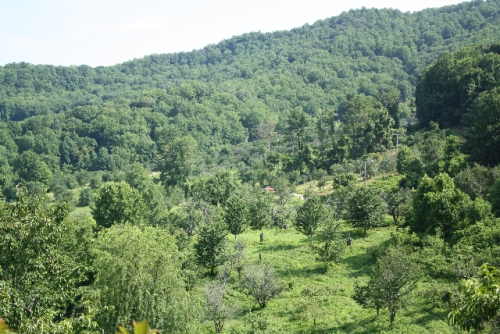 See the red pickup at the center of this scenic Blue Ridge Mountains view? It means Frank’s nearby.

Sooner or later I find Frank tooling around the place’s network of dirt roads in a cherry-red (of course) if dusty pickup. Chores never end for an orchard operator, and harvest season is his busiest time of all. He must move ladders, spray for insects, organize hired pickers who fill commercial orders, greet you-pick customers who fan out everywhere, check on activities at the pack house, and much more. 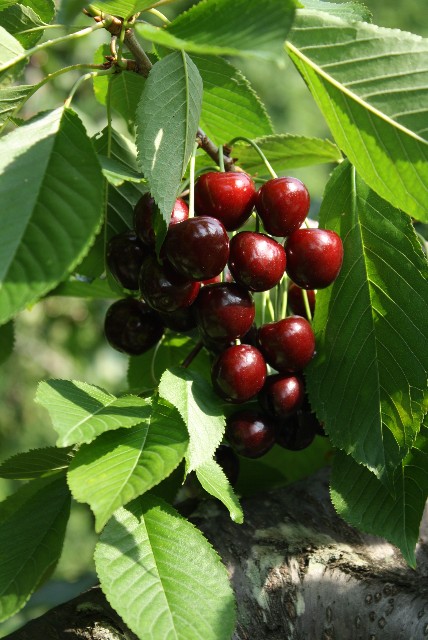 This comes on the heels of months spent pruning, fertilizing, mowing, and worrying about bud-nipping frosts and fruit-splitting rains that can effect the cherries as well as the apples, peaches, nectarines, apricots, plums, pears, and other fruit he grows. Yet despite all these matters weighing on his mind, Frank unfailingly stops to speak with everyone who wants to see him, giving them his full attention if only for a few moments. His earnest demeanor is part of the charm that keeps us all coming back, year after year. 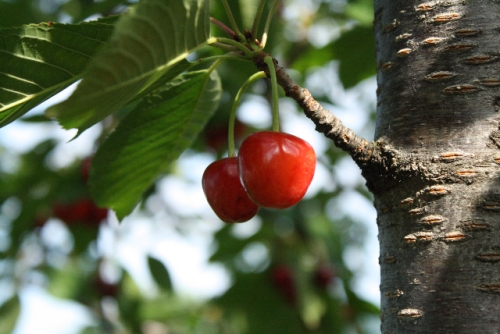 I ask him about Wanda Urbanska, his former wife with whom he shared adventures in Hollywood and back home at the orchard. A fellow writer—journalist, author of eight books, some co-written with Frank including a cookbook and a series about living simply, host and producer of the television series Simple Living With Wanda Urbanska now seen on hulu.com—she’s still in close touch while living in Raleigh. There she works as a sustainability advocate, a writer, and a consultant spreading positive news about Poland, the land of her ancestors.

Henry Levering is a 4th-generation orchardist.

I also ask about their son Henry, who turns 14 this summer, and learn that he’s over at the pack house right now, weighing cherries for a steady stream of guests as they leave. He barely recalls being featured in my earlier article (he was only 4 at the time), but he gladly holds up a folk art “Life’s Just a Bowl of Cherries” sign for me while I take pictures. He tells me about his recent year of living in Poland with his mother, where he learned Polish and French while attending a British school. A confusing but very broadening experience, he says. It’s clear that although he is growing up in this rural orchard, the fourth generation of his family to live and work there, he has glimpsed the bigger world and has his sights set high. I’ll look forward to seeing him at the orchard as long as he’s around, and wish him well on whatever path he takes.

Some of the cherries I picked and the ladder and tree I picked them from.

By the time I fill my buckets with cherries and catch up with the Leverings, I’ve also enjoyed a long summer day outdoors. One fellow picker I meet in passing, after hearing about my Bakery Boy Blog, buttonholes me for any cherry-based recipes I can share. Another expounds upon the cherry brandy he’s been known to make. Still another can’t wait to get her fresh cherries into a bowl of ice cream, a favorite treat.

I gently load about 12 pounds of various kinds of cherries into a cooler and set out for my long drive home. I’m already planning which recipes I’ll try first, second, third, etc., and wondering how many pounds of them will actually make it home if I keep reaching into the cooler and snacking.

As I leave, I pass tiny Ararat, Virginia, the closest town and thus part of the orchard’s mailing address. How appropriate, I think. The community is named for Mount Ararat in Turkey, where tradition and the Book of Genesis claim Noah’s Ark came to rest after the Great Flood in the Old Testament. With that story’s mandate that the chosen survivors “go forth and be fruitful,” it seems like the perfect name to associate with a fruitful orchard run by generations of devoted Quakers.

Here’s how you'll know you’re there.

“My father, Sam, and my grandfather, Ralph, were Quakers, and so am I,” Frank told me when first met a decade ago. “We’ve all taken care of this land and made it fruitful.”

Good work, Frank. Keep it up and take care. I’ll see you next time, during the cherry harvest.

Contains recipes for baking cherries and much more. 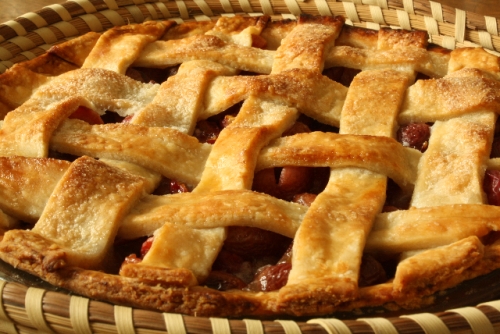 With ladders everywhere, help yourself to easy picking.

Levering Orchard lies 2 miles off the Blue Ridge Parkway at Orchard Gap, about 75 miles southwest of Roanoke, Virginia, and 10 miles north of Mount Airy, North Carolina. From I-77 just north of the Virginia-North Carolina border, take exit 8, follow signs leading to the Blue Ridge Parkway via State Route 148 and U.S. 52, turn north on the Parkway, go about 6 miles, between mileposts 193 and 194 turn right on Dusty Ridge road, which becomes Orchard Gap Road, and watch for the Levering Orchard entrance on the right in one of the steep road’s many tight curves. Cherries ripen from late May through early July. The orchard also produces apricots, peaches, nectarines, plums, and pears ripe for harvest in July and August, and apples from July through November.

For more about traveling in Virginia: www.virginia.org

For more about the Blue Ridge Parkway: www.blueridgeparkway.org 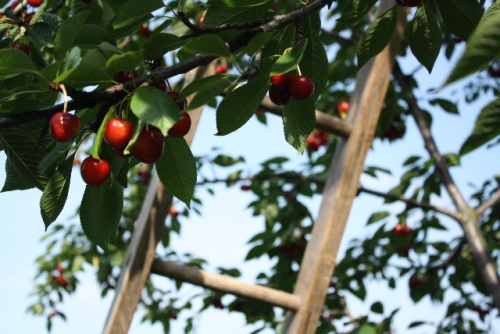