Pronounce it the French way, on-REE, and then try a taste of just about anything and say Oo-la-la!

Henri’s Bakery has made Atlanta bakery fans happy for more than 80 years, even if many still don’t get the French pronunciation right. “Some people say HEN-ree and we just let it slide,” a saleswoman told me as I bit into an enormous chocolate éclair filled with Bavarian crème. “Those who know us best and have been coming here forever get it right and say on-REE.”

It’s a moot point when your mouth is too full of goodies to talk, which is often the case at Henri’s, a mainstay at the Buckhead Village shopping and dining district in Atlanta. Founded in 1929 by Henri Fiscus, who emigrated from France’s Alsace-Lorraine region, it is now run primarily by granddaughter Madeline Leonard and co-owned by five siblings including Madeline, her sisters Suzette, Michelle, and Mimi, and their brother Ray. 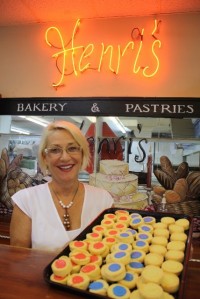 FLIGHT ATTENDANT TURNED BAKER I’ve met many bakers, but never one whose path to baking matches Madeline Leonard’s. “I was a young woman working as a flight attendant when my grandfather died in 1974 at the age of 80,” she says. “I didn’t work at the bakery much growing up, but I was very close to my grandfather. It was a shock to learn that he had left the entire place to me. I basically inherited Henri’s.”

At first she wasn’t sure what to do, so she kept her airline job. “I signed up to work all-night turnaround flights, and I’d go straight from the airport to the bakery at 5 a.m. and learn all I could about the whole operation. Henri had trained his staff so well they could run it without him, but that couldn’t go on forever. I realized if I didn’t keep Henri’s going, the bank would take possession and sell it. So I studied all the formulas [bakers prefer the word formulas to recipes] and the baking techniques and the business side. Two employees who worked for Henri and taught me a lot—brothers Donalson and Willie James—are still here. In the beginning I was afraid I’d mess things up, but as I gained confidence I learned to love it.” Soon she  quit moonlighting as a flight attendant and devoted her full attention to Henri’s.

KNOWN FOR It’d be easier to list what Henri’s is not known for, but here’s a short version of the good stuff.

EXPANDED ROLE Over time Henri’s has diversified to include a full-scale deli and sandwich shop famous for thickly stacked Po’ boys on French baguettes picnic-ready egg salad and tuna salad, party-ready fruit, veggie, meat, and cheese trays, and a variety of quiches and pot pies. There’s also an espresso bar and indoor and outdoor seating for the lunch-and-linger crowd.

THEY DO IT ALL While the trend in bakeries leans toward more specialized niches (notice the cupcakes-only places springing up lately) Henri’s manages to excel in just about every aspect of baking. It’s a disappearing genre—and a marvel of carefully orchestrated production—that deserves our applause and support.

WATCH THEM WORK Personally I like it when a bakery lets you see what’s going on in the back room. First, it’s quite a show when all the bakers are working at once, creating amazing goodies. Second, it’s bound to be a cleaner operation if employees know the customers are watching every move. At Henri’s a broad picture window behind the display cases allows views of an array of ovens, mixers, workbenches, and busy bakers. A separate window reveals the cake decorating area, where observant visitors might pick up pointers to improve their own cake-frosting skills. 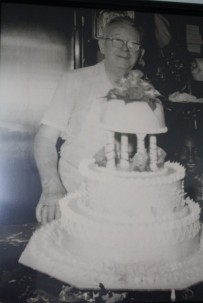 MORE ABOUT HENRI A faded photo (shown here) of founder and namesake Henri hangs in the bakery office. “My grandfather, who came to America from France in 1921, was a true master of the bakery arts,” Madeline says. “He worked as a chef on ocean-liners and at fine restaurants in New York and Atlanta, including a stint as head chef at the Biltmore Hotel in its heyday on West Peachtree Street not far from here. He worked in a Midtown bakery, bought it, renamed it Henri’s, and moved it four times before settling in 1967 where we are now in Buckhead. He’s still an inspiration. Not a day goes by when I don’t think about him. I love carrying on the baking tradition he started.”